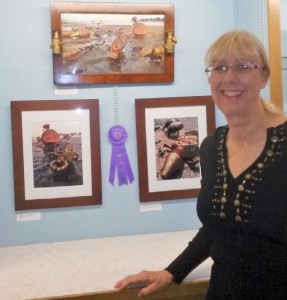 In September the Salem Art Association held a juried show which was judged by Trevor Smith one of the curators of the Peabody Essex Museum. The theme was “Flux”. The Angry Ocean Photos were awarded “Best of Show”.

At the ‘Friendship’ Salem MA

“THE INVASION HAS BEGUN”

Competing against forty other artists Kathy Abbott’s “The Angry Ocean Project” took 1st prize last weekend at “Trash Bash 2014: Somerville’s Second annual Recycled Arts Competition”.  According to the organizers the judge’s scores for the top three finalists were extremely close and it was the added ‘popular vote’ from the attendees that put “The Angry Ocean Project” in first place!

Beginning Monday, June 9th (6/9/14) the Angry Ocean Project ‘creatures’ will be on display in the first floor gallery of the NOAA Fisheries building at the Blackburn Industrial Park (55 Great Republic Drive) in Gloucester.  Each week for the month of June a different set of ‘creatures’ (there are over 60 creatures in all!) can be seen making their way across the NOAA building’s first floor!

Watch as the creatures crawl their way out of a bait box filled with ocean debris! (Note: The parts for the creatures, the ropes, the debris and even the bait box were all found on local beaches.)

A picnic at the beach is over run by angry creatures.  (Note: all the creatures in this installation were made from debris commonly left over from a fun day in the sun.  Even the picnic blanket was a beach find!)

This is Nina Samoiloff. You can see her photos of marine debris on the back wall of the gallery.

They let me put a table up next to the exhibit.

This is my comment box. The legs for this creature were made from pens I found on the beach.

This poor creature got stabbed by a pen & chopsticks!

The life preserver was another beach find.  It’s made of plastic, someone probably used it as a yard decoration. A piece broke off as I was setting up the exhibit.  I wasn;t going to use it but the NOAA guys convinced me that it made it feel like real ‘trash’!